Kiran Rajesh Ballat, 34, is a homemaker with a family that includes her husband, who owns a polishing machine, a two-year-old kid, her mother, sister, brother, and sister-in-law. Kiranben is a 7th-grade pass out, who was unable to continue her education further, probably due to the financial difficulties in her family when she was younger. Kiranben and her family live and reside in the Suez Farm area.

Kiranben was asked about how she got to know about the Sanchetana organization and why she decided to be a part of it. She replied: She got to know about the organization from one of the team member, from her society, who used to visit, and used to meet several other women and shared health-related knowledge with each other. She got the information and decided to join the adolescent health program when she was 17 year old and now at the age of 34 she is still with the organization’s women’s program. From the program, she got to know and learned a lot about the various diseases such as Anemia, Malaria and etc, something that she was totally unaware of. On the other hand, she also was able to talk freely, learn, and be aware of menstruation, white discharge and other taboo subjects in her environment. Kiranben had no prior knowledge about the world and current affairs. After joining the institution, Kiranben has gained confidence and has learned a lot from the organization, she also performs in various dramas and other activities in different places. Whatever knowledge she obtains and learns, she shares it with her family, which has brought a lot of difference in her personal life and has improved the relationship in her family.

Sukhiben is a Community Development Volunteer (CDV) withSanchetana for many years. Her age is 67 years now and she is very active. Her husband aged 72 years and doesn’t earn.She has a son and daughter and they say that her husband has always been supportive to Sukhibenand never denied Sukhiben to participate in Sanchetana’s work. She began to participate in different programs of Sanchetana from the year 1997 in theChild and NutritionProgram, where she made food for malnourished children of the community and motivated mothers to do the same. She received health-related training in pre and postnatal care. Sukhiben, in early 2000, participated in the Adolescent Health Program of Sanchetana, in which she visited the home of many girls and talked to their parents. She grew slowly as a leader with her strong leadership skills. She formed a group of 10 women and helped them to open an account. Sanchetana has helped her to boost up her self-confidence. She took a loan of Rs. 10000 from our capital assistance program. She beganto purchase the jewellery of Bagasara metal and sold it. Sanchetana gave her information and helped her reaching out to exhibitions and she could begin her small stall with the financial assistance she received. Today she is independent and in a much better change of her own life. It is her wish to remain associated with Sanchetana’s work in her whole life. 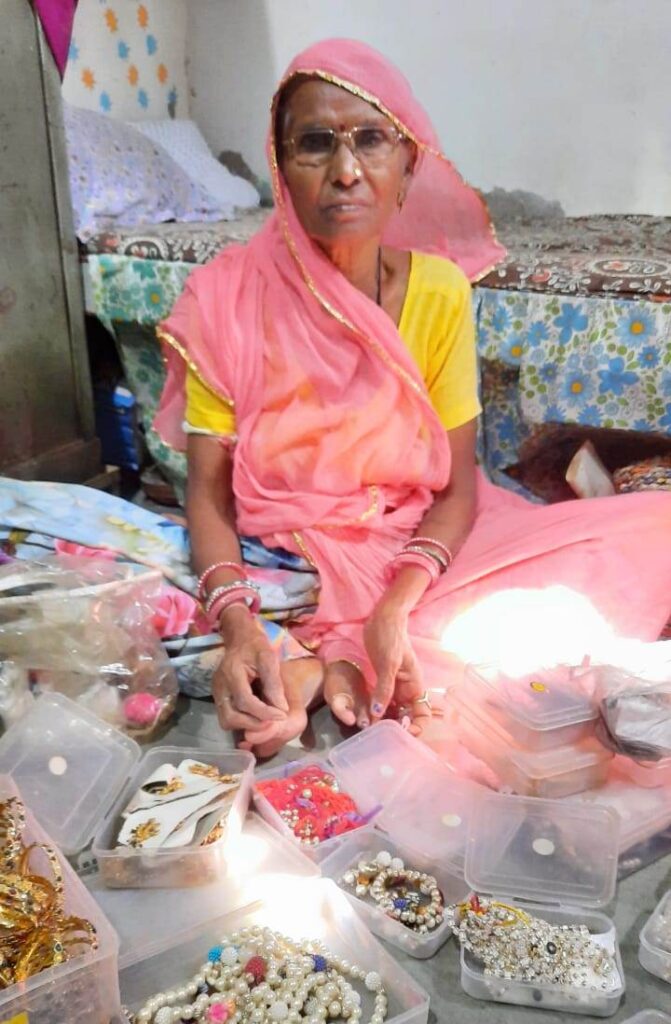 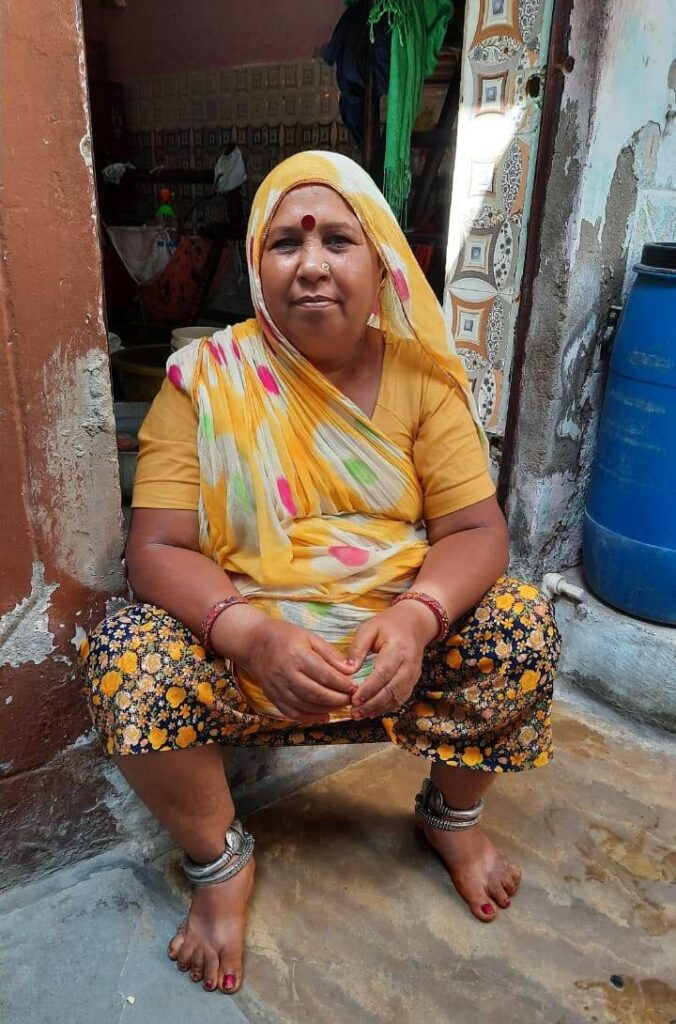 Meeraben, our 52-year-old partner, resides, with her family consisting of her husband and 7 children (5 daughters and 2 sons), in Garibnagar area of Behrampura, Ahmedabad. Her husband is a labourer. In the year 2006, her daughter Yogita associated with the institution.(Our team members visited their areas regularly and gave information related to health which Meeraben found useful. This encouraged her to bond with the institution as a leader- Community Development Volunteer (CDV) in the year 2010. According to her, she was provided with diverse information related to the menstrual cycle, menstrual hygiene, prevention and treatment strategies against various diseases like anaemia, HIV, etc, food habits and misconception of avoidance of food due to its nature, the inequalities prevailing amongst men and women in the society. She further added that she was made aware of the problem faced by young girls due to the tradition of child marriages. Because of all these experiences Meeraben developed a fresh perspectiveand didn’t get her daughters married at a young age. She gives credit of the same to the institution.

She adds that the institution introduced her other side of the world and its varied ideologies. She visited places like Parvati hills, Kutch, etc. She also participated actively and enjoyed various cultural programs organized by the institution. Most importantly, Meeraben is now proud to vocalize that she has imbibed self-confidence under the guidance of the institution. Presently for standing up against and resolving any issues related to water and sewage, she reaches out to the relevant Government officials with other women of her area. Actions like these gave a boost to her self-confidence. Meeraben currently earns money with the help and counsel of Sanchetana. She took a loan of Rs. 10000 from the capital assistance program in the year 2015-16 for setting up her ownbusiness of bleach and washing powder, which presently exists. She became self-dependent under the income generation program by Sanchetana. She maintains her family with the revenue generated through her business. Also, she has got her two daughters who now have grown up, married. At present, she has decided to make her daughter-in-law jointhe institution as well, as Meeraben says that institution played a role of parents who gave her a proper direction in her life and made her self-dependent and gave her and her family a life of respect for which she always is grateful.

I joined in Sanchetana’s Health club and in Non-Violent Communication (NVC) programs. I used my training home. My elder brother didn’t want my younger sister to pursue education after 8th class. I understood his position and my sister’s choice. I could build a bridge between both of them and convinced him of importance of education. This became possible because of the NVC insights.  I also am able to find peace of mind after understanding my feelings and vocabulary to express them. Understanding the importance of making choices with right understanding has given me the space to explore many new choices.In health club classes I learned about anaemia- its causes, diet that should be followed, nutrition-rich foodstuffs, and details of the menstrual cycle. Initially, I feared stepping out of home alone but now I am fearlessly able toattend meetings conductedevery month.  I can confidently talk to others, make new alliances and enhance my knowledge through discussions. I became self-confident, independent and I wish to engage my younger sister with Sanchetana so that she too could experience the positive life changes. 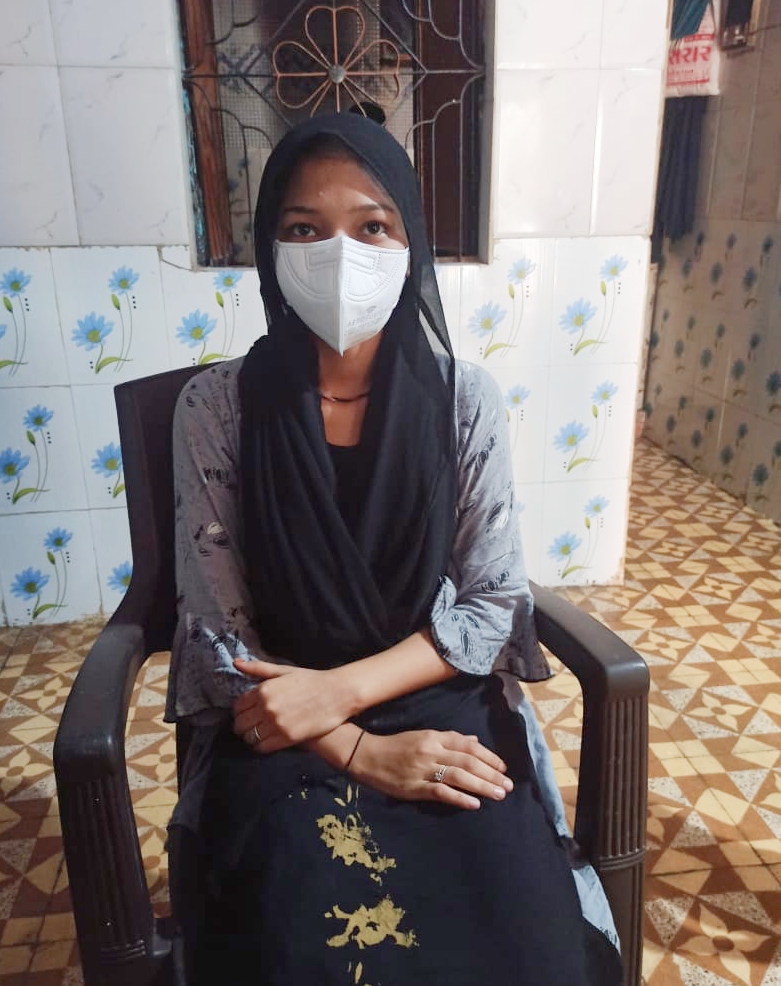 I could study only till 8th class since my father believed that it’s not essential for girls to study and do jobs later in their lives. Because of such mind sets of people around me, I too refrained from exposing myself to the happenings of the world. Once, a team of Sanchetana came to our area and shared Sanchetana’s work with us So Adolescent girls from our areas including me enrolled in the Health Club Program.  I didn’t miss any of the meetings which were conducted once a week to educate us about our SR health and hygiene. I got to know everything about anaemia- its causes, effects, and diet to be followed. In addition to it, I understood the causes and reasons behind menstruation, personal hygiene to be maintained during the periods, the occurrence of white discharge, and changes that occur in our body and mind during adolescence. Initially, I didn’t know that menarche is the start of menses and menopause is when women seize to have menses. I finally understand and infer that education is extremely important and I’m thankful to Sanchetana for helping me grow as a human being too.

Ritaben Panabhai Parmar resides in Behrampura, Ahmedabad. Her family consists of her parents and brother. Her father is a labourer while the mother is a homemaker. Rita, who is 20 years old now got associated with the institution’s Adolescent Health Program in the year of 2013. She has recently passed her 12th grade. She got to know about the institution through a meeting held by women of her area. Later, she joined the institution and she was immediately permitted by her parents for the same. Rita says that she gets various health-related trainings for diseases like Anaemia, the differences between men and women in the society, menstruation cycle, colour, symbol, etc. All this information proved very helpful in her life. According to her, after receiving the reliable knowledge, she was able to share dialogue and make her family members and her community aware of the same. There are many false believes prevailing in the society which can be eradicated only through knowledge. Apart from these Rita also attended skill-development training of beauty parlour and henna through vocational training centres arranged by the institution. Now she uses it as a means of earning and becoming self-dependent. She was provided with a kit worth of Rs 500 from the institution. Apart from these, she was provided educational assistance that helped to complete her 12th standard. At present, she runs a health club at her home and gives training to 10 girls. She gives the entire credit for encouraging a positive change in her life to the institution and motivates as many girls as possible to join the institution. 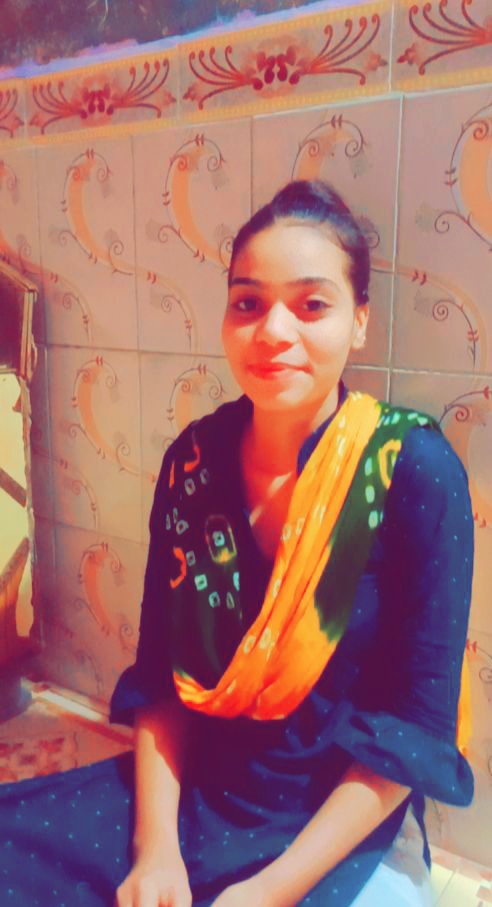